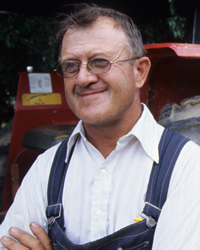 The Low German, or Plautdietsch (Plattdeutsch), speaking people migrated in the late 1900s to North America from predominantly Switzerland and Russia. In North America, they originally settled predominantly in the northern midwest United States, specifically Dakotas, Kansas and Nebraska with many others spreading throughout Canada. In fact, so many settled in the south-central part of North Dakota that is became known as "the German-Russian triangle".

Plautdietsch, or Low German, was originally a Low Prussian variety of East Low Saxon (German), with Dutch influence, that developed in the 16th and 17th Century in the Vistula delta area of Royal Prussia, today Polish territory. The word is etymologically cognate with Plattdeutsch, or Low German. Plaut is the same word as German platt or Dutch plat, meaning 'Low', but the name Dietsch = Dutch Diets, meaning 'ordinary language, language of the people'; whereas Deitsch can only refer to German Deutsch.

The language is spoken in Canada (particularly Alberta, Manitoba, Ontario, Nova Scotia, and Saskatchewan) and the United States (primarily in Kansas, Texas, and Oklahoma) by Mennonites. They are members of an ethno-religious-cultural group that originally fled from Holland and Belgium to Russia in the 1500s to escape persecution.

Low German speaking Mennonites keep their own identity, using their Low German language and also maintaining their ethno-religious values as Mennonites. However, they represent a range of religious values and perspectives from conservative to more liberal; thus some of the Low German speaking Mennonites live without electricity relying on horse-drawn carts while others take part in mainstream society and use modern conveniences.

Low German speaking Mennonites are an ethno-religious-cultural group established in the 16th century during the Protestant Reformation when some Christians separated from the Roman Catholic Church. They date their separate Christian identity to the Anabaptist movement of the early 16th-century Reformation.

Anabaptist (literally "rebaptizers") and Mennonite ordinances views baptism as a choice made by mature voluntary believers (not infants); the communion service sometimes includes foot washing as a symbol of humility and service.

They are remarkably different from the ethno-religious peoples known as Amish and Hutterites.