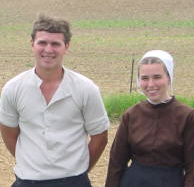 Historically, the Pennsylvania Dutch were Germans who settled in Pennsylvania in the colonial era and whose name is a corruption of the word "Deutsch", meaning "German".

The largest Dutch Pennsylvania population is in the state of Pennsylvania with well over 144,300. Other states with significant populations include Ohio, New York, Indiana, Michigan and Wisconsin.

The Pennsylvania Dutch are a very diverse group that can be sub-divided into separate peoples. Some are a distinct ethno-linguistic people group, while others are an ethno-religious people group and then others are more of a socio-cultural people group.

Second, there are ethno-religious Pennsylvania Dutch who some still speak Pennsylvania at home and others do not. They predominantly are Amish and Mennonites.

On the other hand, Amish do maintain the language; hence the impression that Amish are Pennsylvania Dutch people. The most famous Amish settlement is Lancaster County, PA. Because of a combination of pressures, including decreased availability of farmland and high birth rates, many Amish moved out of Lancaster County, to other parts of Pennsylvania and adjoining states, and as far west as Wisconsin. The migration of Lancaster Amish is not exceptional, however; Amish people have been historically quite mobile in order to adapt to changing external circumstances, often economic.

A large number of Amish live in the Midwest, especially the states of Ohio, Indiana, Illinois, Wisconsin, and Iowa. Though Amish everywhere share core Christian beliefs, there are cultural and linguistic differences between Lancaster Amish and the midwestern United States Amish.

Historically, most Amish attended public schools until consolidation and curricular changes compelled them to operate their own schools. Recognizing the importance of fluency in English, Amish require that English be the sole medium of instruction in their schools, sometimes even during recess as well. High German, the language of the Bible, prayer books, and hymnals, is commonly taught as a subject in Amish schools.

Like the Amish, Mennonites come from the Anabaptist tradition. The early teachings of the Mennonites were founded on the belief in both the mission and ministry of Jesus, which the original Anabaptist followers held to with great conviction despite persecution by the various Roman Catholic and Protestant states. Rather than fight, the majority of these followers survived by fleeing to neighboring states where ruling families were tolerant of their belief in believer's baptism. Over the years, Mennonites have become known as one of the historic peace churches because of their commitment to pacifism.

Both the Amish and Mennonites makeup the majority of those people who still speak Pennsylvania Dutch at home.